Home Sportsbetting news The quotes and insight you need to pick your way through the...

Seventh Kingdom: bidding for Group 2 success in the Superlative Stakes

The delayed onset of stepping up the two-year-olds in trip this year gives the Superlative Stakes of 2020 a feel more akin to the average Woodcote. Pick a promising maiden winner and take your chances, seems to be the message. All bar one won their last start and the exception, Chesham sixth Bright Devil, won on the Rowley Mile on debut.

Pedigree watchers will be drawn to Hudson River. By Galileo out of a sprinter is how Coolmore try to breed Guineas winners and few sprinting mares of recent years have been more popular than his dam, Mecca’s Angel. Her first foal’s debut win was pretty convincing, too.

Ratings followers will most likely alight on Devious Company, who has already defied a penalty, or wide-margin debut winner Seventh Kingdom. That the latter was able to pull clear off a steady pace, having raced with such obvious inexperience, says plenty. 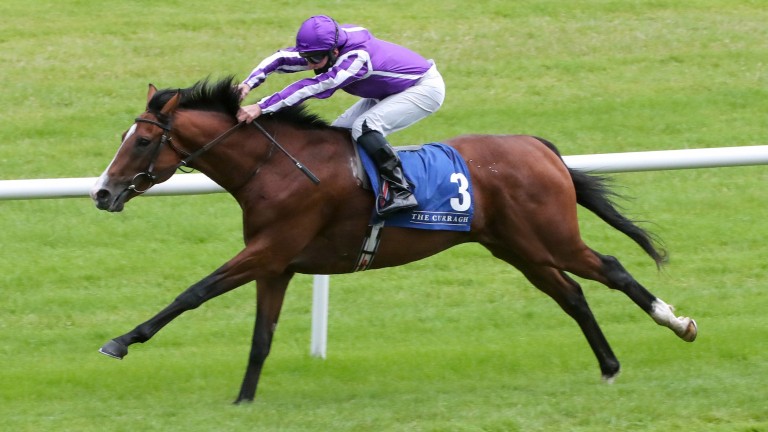 Hudson River: wins on debut at the Curragh under Seamie Heffernan

It was not enough for Frankie Dettori to pull rank over David Egan, though, who keeps the ride on Seventh Kingdom while Dettori takes over on King Zain. A Kingman colt out of a half-sister to Youmzain, it was not necessary to see his strapping frame burst from the stalls at Kempton to note his long-term potential. He returned a good time figure and would be the choice of the clock-watchers – probably the stride-measurers, too, at a guess.

It should be noted that many in the field made most or all when winning their first race. That is symptomatic of good horses racing against ordinary ones, of course, but look out for those who have not yet shown the ability to keep the lid on. On the necessarily harsh basis of their few runs to date, Ventura Tormenta, Snash and Miami Joy are mentioned as potential free-goers.
Keith Melrose, betting editor

Out To Make A Splash

Debut winner Master Of The Seas bids to emulate his sire Dubawi, who won this Group 2 contest back in 2004, after making a splash of on debut across Newmarket Heath on the Rowley Mile last month.

Trainer Charlie Appleby knows what it takes to win the race having won it twice in the past five years with Boynton (2016) and the ill-fated Quorto two years ago.

Master Of The Seas could go some way to easing the recent loss of the latter if he can follow up his win over William Bligh in a four-runner contest run over this trip when the ground was registered as soft.

The juvenile was sent off the stable second-string that day but stayed on well to score by three-quarters of a length, with the form boosted when the runner-up scored by three and a quarter lengths at Haydock last week

Master Of The Seas was thought more likely to head to France for his first outing in Group company but the recent rainfall has led to him being employed more locally.

Appleby said: “We were pleased with him on his first start and he has done well since. We feel that he doesn’t look out of place in a contest like this and should hopefully run a very respectable race.

“There are a lot of colts with a similar profile but we know he handles the Newmarket undulations after his debut win.”

Oisin Murphy, rider of Bright Devil
He’s an improving colt and hopefully the ground will dry out a bit but if he runs I expect him to run well.

Tom Dascombe, trainer of Devious Company
We’ve had this race in mind for him since he won his maiden at Haydock and he’s since followed up at the same track under a penalty. He’s won twice on good ground and hopefully it will dry up a bit for him but most will be saying the same.

Bruce Raymond, racing manager to Jaber Abdullah, owner of King Zain
He’s very well regarded and it was no surprise when he won first time at Kempton. Obviously it’s a tougher race but hopefully he can handle the ground which will probably be sticky.

Roger Varian, trainer of Saint Laurence
He was fourth in a warm maiden on his debut at Newmarket from which the fifth went on to land the Coventry. He then won his novice in good style at Redcar but this is obviously a deeper race. He deserves to take his chance against a field of similar types.

John Gosden, trainer of Seventh Kingdom
He won nicely on his debut at Doncaster when there was some give in the ground so if he handles the surface he should go well.

Charlie Hills, trainer of Snash
He was a good winner last time when he was still showing some greenness. I think he’s come on from the run, and he’s a nice horse, so we thought it was worth chancing our arm in a race like this.

Place a bet of €1 or more on any UK or Irish race on racingpost.com to watch it live. Click the ‘Watch Live’ icon at the top of the racecard when it’s due to start to watch the full race

Gambling legalised in Ukraine as Zelensky signs act into law

Reinvent and stay with the times: businesses need to shed their...