Charlie Appleby spoke of his extreme confidence in Pinatubo before his third start of the season, but exhilaration and resilience were the words jockey William Buick reached for after last season’s champion juvenile roared back to the winner’s enclosure in the Group 1 Qatar Prix Jean Prat.

Buick found himself with plenty to do a furlong and a half out, but Pinatubo made ground with authority and was always just holding Lope Y Fernandez, while Malotru ran on to complete a 1-2-3 for the Anglo-Irish visitors.

Paddy Power reacted by trimming Pinatubo to 100-30 (from 9-2) for the Sussex Stakes at the Qatar Goodwood festival at the end of the month, while Coral went as short as 5-2 behind market leader Siskin.

However, Appleby reported that Pinatubo is unlikely to line up in that Group 1 over a mile.

The trainer said: “It’s something I’ll obviously speak to His Highness [Sheikh Mohammed] about but I would say the Sussex is very unlikely. He’s had two weeks from the Guineas to Ascot and three weeks from Ascot to here so I think he deserves a little bit of a break now.

“We’ll look at the autumn and whether we’ll come back here for the Moulin or stick at seven furlongs in the Foret, we’ll see. The main thing is he got the job done, which has sealed his three-year-old campaign.”

Asked if he had felt pressure following two early-season defeats, Appleby said that it was Pinatubo’s owner-breeder who was keen to have a third crack at a Group 1 in five weeks.

“As always Sheikh Mohammed gave so much confidence to me and the team,” said Appleby. “When you get beat in a Guineas and then just chinned in a St James’s Palace, it can be hard to take.

“I spoke to him ten days ago and told him how well the horse was and he said to me, ‘If you’re happy, go again.’ Thankfully we’ve managed to deliver the right result this time.” 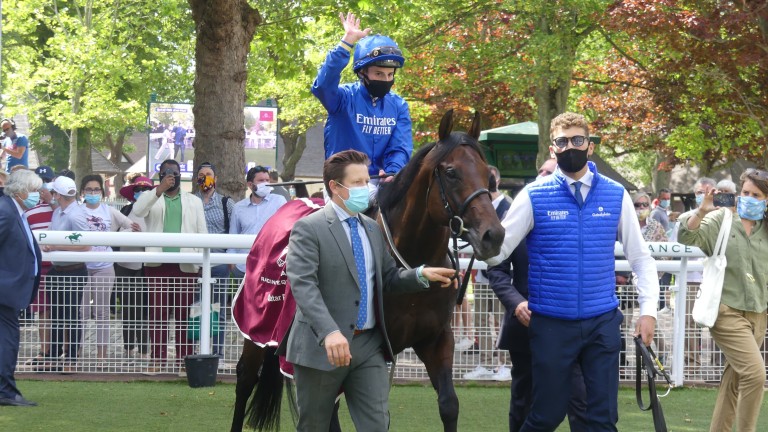 Buick is arguably in the best position of all to judge whether Pinatubo took a step forward from his second in the St James’s Palace behind Palace Pier.

“He felt really good today,” said Buick, who with Appleby completed a three-timer on the card. “He showed his brilliance, he showed how fast he is and I think coming back to seven furlongs was a little bit easier for him.

“All options are open for him still and it’s just exhilarating how well he travels through his races and how quick he makes up his ground. He’s a very exciting horse.

“At Ascot he did absolutely nothing wrong and he was just outstayed by a horse who was on the improve and was stronger at that trip on that day. But I think he showed his resilience and constitution to come out of that race and do what he did here today.”

Ioritz Mendizabal was almost back in the winner’s enclosure seven days on from his Prix du Jockey Club heroics as Lope Y Fernandez got the better of his Aidan O’Brien-trained stablemate Arizona.

“I’m delighted with his performance and he really showed great speed at the finish,” said Mendizabal. “He was beaten by a very good horse but he has nothing to be ashamed of. A little bit of cut in the ground might really help him.”

Marco Botti was rewarded with his decision to skip Royal Ascot with Malotru, who ran a huge career-best in third.

“He ran a blinder,” said Botti. “We came here hoping he would run a good race and when I saw the final declarations it was unfortunate that all the best horses turned up. We were keen to take our chance over his best trip on the fast ground he needs and there’s no disgrace to be third.

The Appleby-Buick roadshow was bookended with a gutsy Listed success for Althiqua in the Prix Amandine and a fine effort from Commonweath Cup sixth Royal Crusade, who came from last to win the Prix de Ris-Orangis in another full podium for the visitors rounded out by Glen Shiel and Dubai Station.

“The Prix Maurice de Gheest was always our long-term plan,” said Appleby of Royal Crusade. “We’ve learned the hard way that he doesn’t stay seven and six is his bag but I see no reason why he can’t eke out that extra half a furlong.”

Place a bet of £1 or more on any UK or Irish race on racingpost.com to watch it live. Click the ‘Watch Live’ icon at the top of the racecard when it’s due to start to watch the full race

Get Married On The Beach – 5 Trendy Wedding Choices