Less than a month after signing up as a partypoker Team pro, Jordan The Undecided Drummond has taken down the red diamond site’s Sunday Big Game – a $141,000 win yesterday ahead of the likes of Junglemandan and PayAndPlay…

While some of the biggest names in the game braved the coronavirus fears to head to Sochi for the LIVE MILLIONS SHR series, the online game received a boost, player numbers up almost everywhere.


Junglemandan, aka Daniel Cates, managed another deep run, eventually falling in 9th place for just over $14k, along with the journalists least favourite online pro kgroqigmqtbmq.


The big story, however, was Drummond and one of his students – Justin Taylor ‘LappyRage’ Lapka – making the final 3.


Lappy has been hitting big scores on ACR recently, and a coaching session with his staking boss this week seems to have worked wonders on partypoker too.


It could have been an even bigger payday than the $71,983 Lappy took for 3rd yesterday, but his aces were cracked all-in preflop at an unfortunate moment.


That left Drummond, aka The Undecided, and partypoker highstakes reg NOLIMITHOLDEM to fight it out heads-up, and the site’s most recent ‘acquisition’ pulled off the win, a $141,086 scoop. 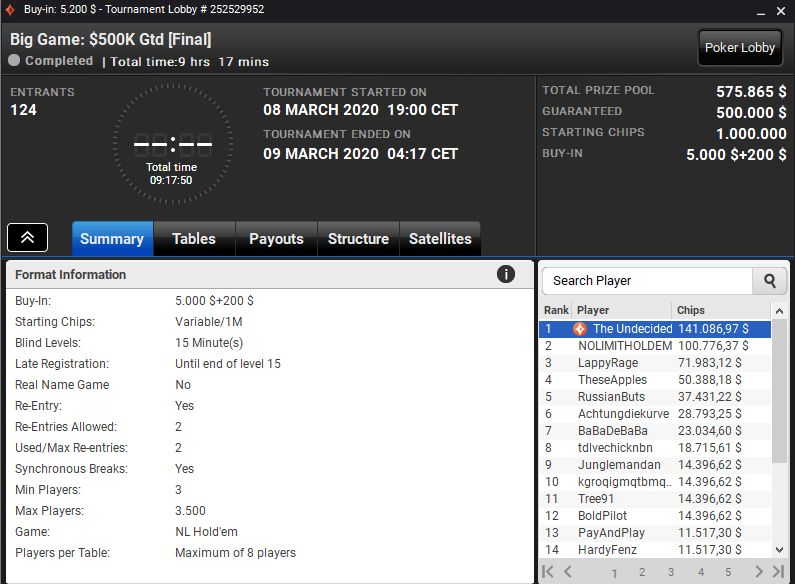 The Sunday High Roller Masters was another tournament with plenty of runners, the $100k guarantee smashed when 147 entries signed up.


Madgenius111, El_Cucuy and AndreyBolkonsky were all deep in the money, but the win and $33,795 went to IlProfessore who defeated STAY_HUNGRY heads-up, the latter pocketing $24,255 as consolation. 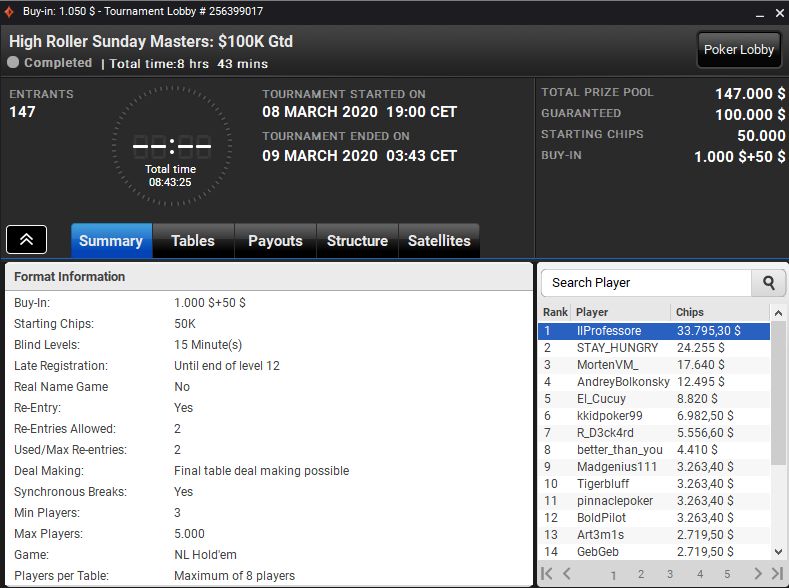 Over on Americas CardRoom, it was a similar Sunday story of increased player numbers, 1812 runners in the BOSS $300k GTD Sunday Special.


The $215 buy-in tournament had almost $60k up top, and although there were quite a few new names in the frame at the final table, it was one of ACR’s highstakes regs who took it down.


Frittando took down the regular version of the tournament just last week for close to $40k and repeated it yesterday during the Bigger Online Super Series, seeing off JJUUffff to bag the $59,443 top prize. 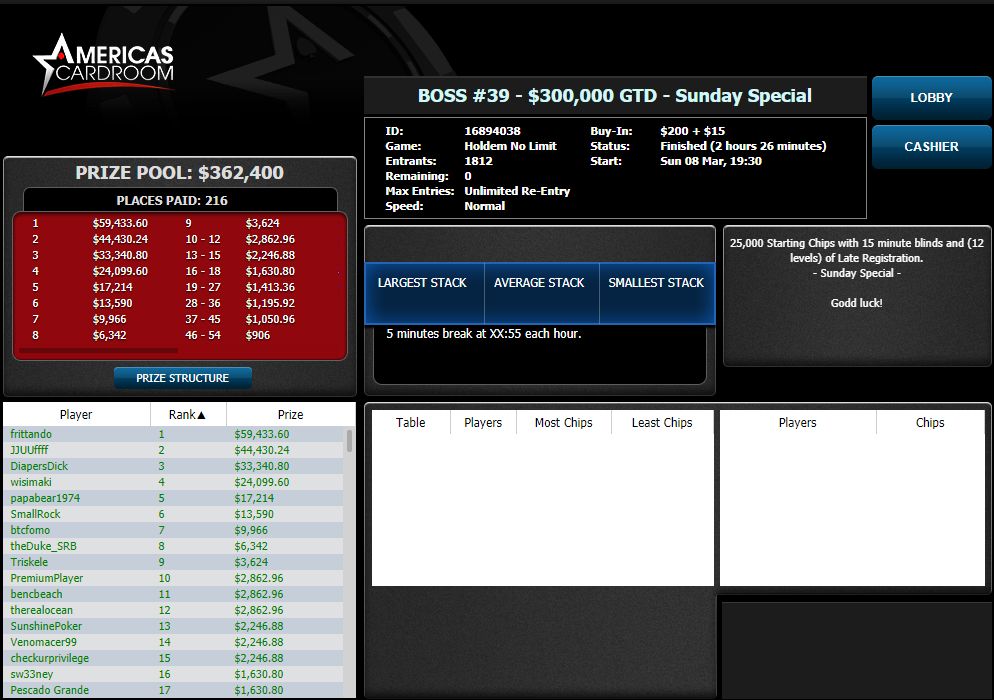 The $80k GTD Sunday Special PLO attracted 377 entries, one of the few events to offer a small overlay to players this weekend, and the 4-card bragging rights came down to a battle between jordanfrog22 and rocky1717. 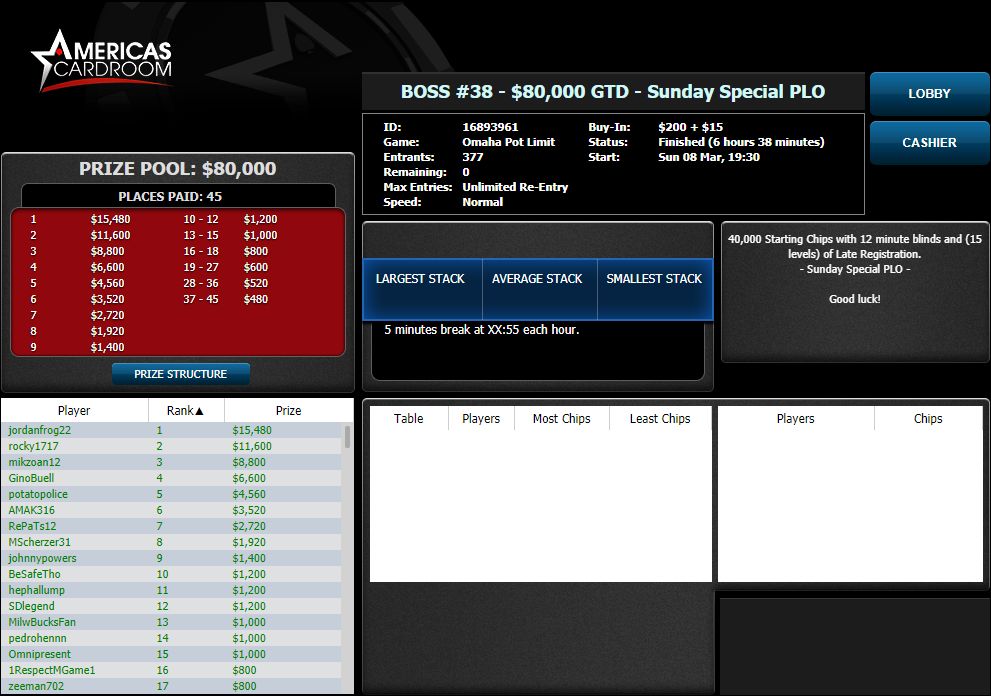 It was PokerStars turn to suffer a server crash this week, unfortunately during their Sunday Million PKO with under 100 players left of the original 14,502 entries.


Pius Heinz, the former WSOP Main Event champ aka MastaP89 on the red spade site took over $10k plus $2.7k in bounties as his share of the stack-based payouts, Brazil’s flaviobbud in the lead and cashing for almost $17k.

There were more Progressive Bounty tournaments on PS yesterday, but the Sunday Warm-up remained a traditional NLHE tournament, with 653 entries and a $130,600 prizefund.


Andras ‘probirs’ Nemeth came close to lifting the top prize, falling just short in 3rd for an $11,933 cash, the heads-up battle between TerjePower18 and Paffchen going to the former, a win worth $22,660.