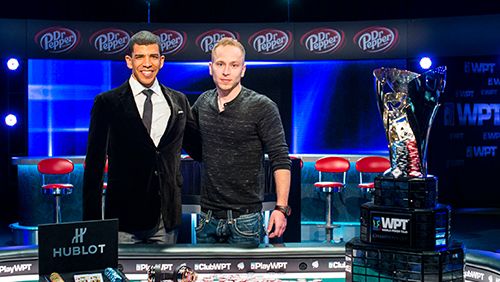 Day 1 of the $25,500-entry Super High Roller saw 35 entries confirmed but overnight, it was Marty Mathis who held the chip lead. Romero was behind Mathis in the counts, but those standings would flip by the end of the day.

The first player to leave the action was a former High Roller winner in Jack Sinclair. He was swiftly followed out of the door by players such as Leo Fernandez, Sergio Iralasky and Rainer Kempe as the field reduced from 15 to less than a dozen. It would be Brazilian partypoker Team Pro Joao Simao who would bubble the final table, but the money bubble would burst leaving only five in the money, so there was still an awful lot on the line, with the 5th-placed minimum cash to the value of $60,000.

With eight players remaining, it was Polish superpower and fellow partypoker Team Pro Dzmitry Urbanovich who busted the final table first. Jacob Daniels was all-in against the Polish player with the best hand, and Urbanovich couldn’t hit his combo draw. Out in 7th place was Roberto José Sarga, leaving six players at the table with only five paid. It would be Scotland’s finest tournament poker player of all-time, Niall ‘Firaldo’ Farrell who would bubble the event, his pocket eights all-in and at risk, but unable to hold against Daniels’ queen-ten.

Daniels was on a tear, and was the deliverer of another player just after the bubble had burst, calling Francisco Benitez’s shove for just five big blinds. Benitez held ten-eight, but Daniels had ace-ten and stayed ahead through the five community cards to be a massive chip leader with four players still in the hunt.

Three Americans would finish in the top three places when popular and highly successful pro Ivan Luca was all-in with the best hand, ace-six, but called and busted by James Romero with king-nine which hit. Romero suddenly had the momentum and used it to devastating effect. Daniels dropped below Romero’s stack-size and when Daniels found pocket threes and went all-in, he was called by Romero with pocket eights.

Those eights held to send Romero into the heads-up match with the lead, but it didn’t stay that way across an entertaining hour of play where the lead switched between the two men who had come into the day in first and second and would end the evening in the same positions. Only the order was to be determined, and that was turned on its head from the start of play when Mathis was all-in with queen-jack and Romero held the lead pre-flop with ace-ten. That superiority stayed the same through the board and the partypoker MILLIONS South America Super High Roller which started out a truly multicultural affair and ended with an all-American podium had a winner.

GB online gambling yield falls across all verticals in July

The data-driven future of bonusing