Hawk-Eye technology was developed by Paul Hawkins of the United Kingdom, and was first seen in elite professional tennis in 2006. It has also been used in many other sports such as Cricket, Football and Rugby to great effect. With 6 or 7 high-performance cameras positioned at different angles; action on the court or field can be carefully tracked. The system isn’t foolproof, but it has come to be used as a trusted and impartial second opinion.

In Tennis, Hawk-Eye technology has proven helpful when players question the decision of Line Judges, usually with a smart remark or a scowl. Now, at the first Next Generation ATP Tennis Finals to be held in Milan from 7 to 11 November 2017, Hawk-Eye Live will replace Line Judges all together. This news has raised eyebrows in some circles, as it seems that technology is encroaching in every sector, but just as the Internet has made betting easier and better than ever, many believe Hawk-Eye will improve umpiring in Tennis.

A “Fantastic Platform” for a “Landmark Moment”

Gayle David Bradshaw, ATP’s Executive Vice President for Rules and Competition, said in a statement that this first use of Hawk-Eye Live technology could be a “landmark moment” in Tennis officiating. She added that the athletes worked hard and deserved the most accurate judgements possible. With Hawk-Eye Live, the digital decision will be the first and only one that is made; players will no longer be able to question the decision by getting a second opinion from a Line Judge if they disagree with the Umpire.

Sam Green, Hawk-Eye’s Director of Tennis, said that he believed the technology would become the future of Tennis officiating. He went on to describe the Next Gen tournament as the “perfect platform” for the new system, a sentiment that Bradshaw also expressed. As a showcase for up-and-coming Tennis talent, it makes sense that up-and-coming technological developments are also showcased here.

Bradshaw went on to say that the technology of the Hawk-Eye Live system has improved to the point where the ATP feel comfortable using it in a real-match situation, and Green explained that Hawk-Eye and the ATP have worked together to improve line-calling quality and the overall experience of fans and spectators. 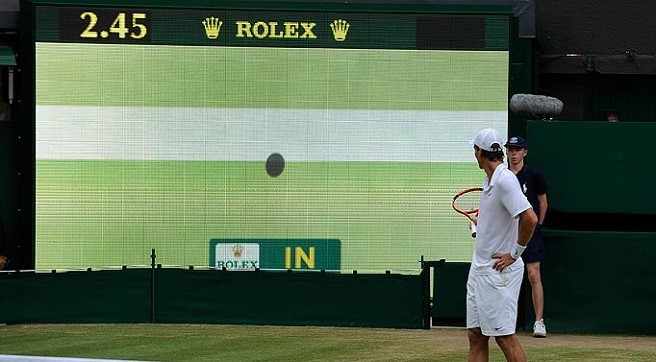 Format and Rules for Next Gen ATP

The idea of the Next Generation ATP Tennis Finals, the organisation of which was awarded to the Italian Tennis Federation and the Italian Olympic Committee after a competitive bid process, is to provide a worldwide platform for the top men’s singles players aged 21 and younger to show off their talents and skills.

The Next Gen ATP is to be held in Milan every year until 2021, and will consist of 2 round robin groups before the semi-final and then the final are played. The action will all take place on single-only courts, and will feature the season’s 7 top players, as well as 1 Wild Card. Several modifications to conventional Tennis tournaments have been made; the best of 5 sets determines each match winner, the first player to win 4 games takes the set, tie-breaks are played at 3-All scores, No-Ad Scoring that is used in other ATP Doubles contests is used, no Lets are permitted, and games use a Shot Clock to ensure a 25 Second Rule.

Matches also need to begin 5 minutes after the second player has arrived on the court, and only 1 medical timeout per player is allowed in each match. The public will be allowed to move around, except at baselines, during matches, and the time that coaches can spend talking to players will be limited. All the changes are aimed at creating exciting Tennis with a faster pace and even higher levels of competition than typical games. The fact that human Line Judges’ days may be numbered is just part of the process!