Ferrari’s newest mid-engined drop-top has landed in Australia, promising to bring open-air thrills to a tightly fought supercar segment. The twin-turbo V8-powered Ferrari F8 Spider costs about $50,000 more than the mechanically similar Tributo coupe, adds 70kg in weight yet somehow pulls off a similar dynamic brief. We hit Sydney Motorsport Park track to see whether the latest Ferrari Spider lives up to its hype.

Put aside your preconceptions, because Ferrari is out to teach us a lesson in physics.

Convertibles, by nature, are supposed to be compromised, flimsy and heavier than their traditional coupe namesakes. Not to mention more expensive.

But in recent years, Ferrari, McLaren and Lamborghini (among a host of others) have been turning out convertibles that seemingly impose little to no penalty for their open-top structures that provide wind-in-your-hair motoring.

Competitors such as the Lamborghini Huracan Performante Spyder ($532,635) and McLaren 720S Spider ($556,000) both dabble around the same territory.

The half-million-dollar outlay for the Ferrari F8 Spider buys a mid-mounted 530kW/770Nm 3.9-litre twin-turbo petrol V8 along with a sleek new design that incorporates a hard-top folding roof.

The Spider’s retractable roof performs its carefully orchestrated movements at the touch of a button, opening or closing in 14sec at speeds of up to 45km/h.

Although the removable roof makes the F8 Spider 70kg heavier than the Ferrari F8 Tributo coupe on which it is based, the vehicle still manages to be 20kg lighter than its predecessor, the Ferrari 488 Spider.

The interior borrows elements from the F8 Tributo, with a driver-focussed dashboard and most of the key controls positioned either on or in front of the steering wheel – or conveyed via two screens that flank a traditional analogue tacho in the driver’s instrument cluster.

There are typical lashings of carbon-fibre, the seats are slim and a new 7.0-inch touch-screen infotainment system has been added on the passenger side of the car.

If we’re honest, the presentation feels a bit off the pace for a $500,000 exotic, especially in the company of McLaren’s swish 720S Spider.

Ferrari offers a seven-year warranty (extendable to up to 15 years). A seven-year scheduled servicing program is available as well, with 12-month/20,000km intervals.

As in the F8 Coupe, the engine borrows roughly half its internals from the Ferrari 488 GTB’s mill yet is 18kg lighter and offers up an additional 38kW. 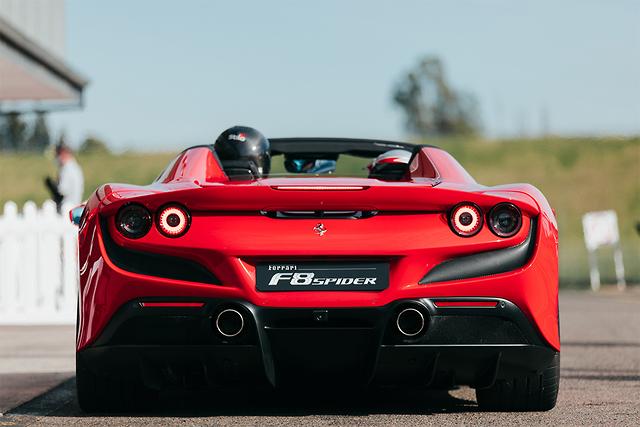 Other bits and pieces have been borrowed from the $645,000 Ferrari 488 Pista with which the 2020 Ferrari F8 Spider shares its outputs. The special track-focussed model donates stronger titanium alloy connecting rods, a new crankshaft and a lightened flywheel to the F8.

While we’re perusing its back catalogue, Ferrari also adapted the air intake system from the 488 Challenge Racer for the Ferrari F8 Tributo.

With improved aerodynamics and more power and torque (up 10Nm) than its precursor, the 2020 Ferrari F8 Spider has an eye-watering top speed of 340km/h. The claimed 0-100km/h acceleration time is just 2.9sec.

The Ferrari convertible’s turbo V8 power is channelled to the rear wheels via a seven-speed dual-clutch automatic transmission that can be manually overridden with steering wheel paddle shifters.

Ferrari’s PR tactics are the stuff of legend. For years, the Italian car-maker has notoriously blocked those who dared to conduct comparison tests between their vehicles and those from rivalling marques. Some have even been banished from official guest lists for being overly critical of the Prancing Horse’s products.

So, with that in mind, let us riddle you this: during this month’s launch event, we were not allowed to conduct a dynamic assessment of the F8 Spider that included both road driving and track driving – even though there were two vehicles present and one dedicated to each activity. 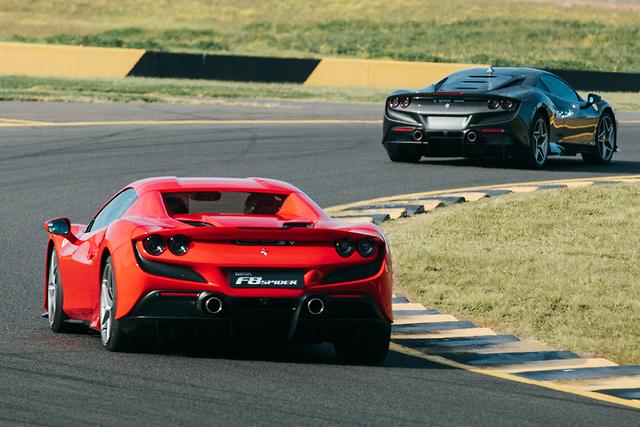 And according to Ferrari officials, we would only have access to the track car for a duration of five laps – about 10 minutes in total.

Even stranger, our impressions of the track car’s dynamics were underwhelmed by the fitment of inferior Michelin Pilot Sport 4 rubber instead of the Michelin Cup Sport 2 hoops that would ordinarily adorn cars in the showroom.

While we’re at it, the vehicle we drove was left-hand drive and could only be driven with the top up.

With all those caveats out of the way, what we can tell you is the 2020 Ferrari F8 Spider is incredibly fast.

The 3.9-litre twin-turbo V8 offers an unmistakable punch in the back that is heavily governed by electronic nannies at low rpm but really materialises in the mid-range.

Forward progress is both swift, sweaty palm-inducing and oddly devoid of a crescendo all at once. Indeed, the engine spins so freely that you’re banging on the circa-8000rpm rev-limiter before you know it. The F8’s relatively dull soundtrack only reinforces this impression. 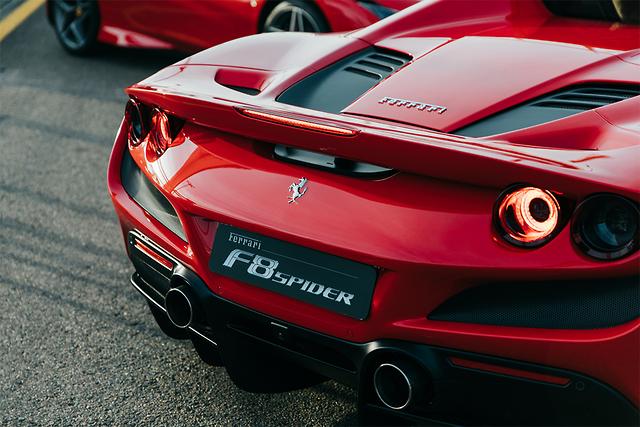 In any case, the F8 Spider easily nudged 260km/h down the front straight at the Sydney Motorsport Park, even with your humble correspondent at the wheel.

We hit the picks at the 200m marker, only to realise its powerful brakes could have been spared for another 50-70m. The huge 398mm front and 360mm rear carbon-ceramic stoppers wash off speed with immense effectiveness and with excellent modulation. They’re fade-resistant too, even at the point of smouldering before a cool-down lap and returning to the pits.

The gearbox does an excellent job of facilitating full-tilt blasts or heavy braking alike, with whip-like expediency.

Sadly, our test car’s inferior Michelin rubber was a big sore point during the launch. It meant the F8 Spider lacked that front-end bite commensurate with a high-flying exotic and, equally, the F8 moved around more than we anticipated.

In Sport mode, with the electronics on high alert, the F8 consistently pulls power and effectively keeps the car tracking straight and true. In Race mode, there is more lateral leeway, with big, grin-inducing powerslides there for the making out of the Eastern Creek layout’s tight Two Turn in particular.

It would be unfair to say the poor choice of tyres left us underwhelmed by the F8 Spider. Even so, our initial hunch is the McLaren 720 Spider offers a more engaging and tactile experience.

Yes, little separates the two, but the Macca’s hydraulic steering offers more feeling and engagement than what is on offer here, helping to cultivate a more visceral experience.

What’s the F8 Tributo like with the top down then?

Sorry, it’s a dead end there too. Ferrari’s minders wanted the hard-top roof kept up around circuit. We left the launch with this amazing car’s raison d’etre untested. 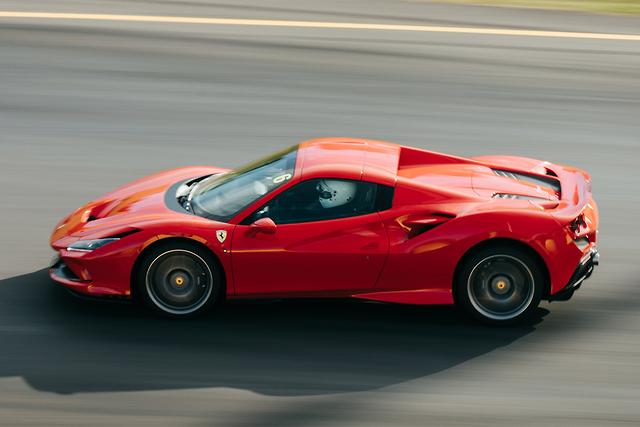 Caught in the web?

It’s easy to say the 2020 Ferrari F8 Spider is a brilliant car. But despite the bravado surrounding it, there are some equally brilliant cars against which it competes.

As far as outright thrills and visceral sensation goes, the McLaren 720 Spider has it by a nose. At least until we can sample Maranello’s finest as Maranello intended.

Gambling legalised in Ukraine as Zelensky signs act into law