Partypoker is using its new partnership with Formula 1’s McLaren Racing to promote the importance of responsible gambling.

A new commercial featuring McLaren driver Daniel Ricciardo has been launched as part of the Party Responsible campaign. This is the first collaborative project between Partypoker and McLaren, which is interesting given that it focuses on responsible gambling rather than a new event or product.

Ricciardo goes to the limit, never beyond

The commercial sees Ricciardo draw parallels between pushing the limits of an F1 car and betting. While that may be a somewhat spurious link, the message is one that regulators and gambling companies are eager to push.

Daniel always pushes the limits, but knowing when it’s time to pit is important.

Partypoker’s campaign is endorsed by British gambling charity BeGambleAware. With F1 a popular sport in the UK, the decision to use Ricciardo as a spokesperson is a play to satisfy local regulatory guidelines. And, with these guidelines set to become even tougher in the future, Partypoker is future-proofing its new relationship with McLaren Racing.

The UK government is in the process of updating its Gambling Act in a bid to make it fit the modern age. The changes are still being debated behind closed doors, but the general aim is to reduce instances of problem gambling. Deposit limits and credit checks are two main areas of focus. So too are the messages put out by companies such as Partypoker.

Where the UK gambling industry goes, other countries typically follow, which is why responsible gambling is becoming a hot topic. This may be why Partypoker has opted to make its first order of business with McLaren Racing something other than a form of self-promotion.

We are proud to be part of a multiyear partnership with @McLarenF1 Its going to be fast paced and exhilarating! Our first branded race is the iconic #MonacoGP on 23rd May … watch this space for more news. https://t.co/OuvgBUmpgb #passtoplay pic.twitter.com/CbXVQ6OTVY

It won’t, of course, be the last collaboration between the two companies. Partypoker signed a multi-year deal with McLaren in May. It kicked off the partnership with branding at the Monaco Grand Prix and followed it up with the new commercial featuring Ricciardo.

What’s next is a matter for the PR team, but we know that certain Formula 1 drivers are partial to a game of poker. The biggest name to swap hairpin turns for three-bet bluffs is Lewis Hamilton. The British racing icon popped up on GGPoker last year. Far from taking it easy, Hamilton jumped into a $10,300 high-roller event against the likes of Isaac Haxton. 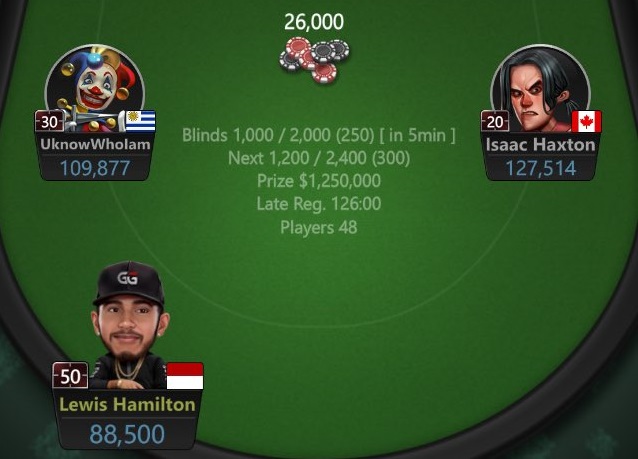 GGPoker even gave him his own avatar (see image above), but a spokesperson confirmed at the time it was a one-off and not the start of a sponsorship deal. With Partypoker now working with McLaren Racing, we may see GGPoker renew its association with Hamilton.

The links between poker and sport are well-established. Stars from the worlds of soccer, football, and basketball have been used by poker companies in the past. Now, perhaps, it’s the turn of F1 drivers.

Dan Smyth is a poker media journeyman who politely reminds CardsChat readers that poker is played all around the world, not just America.

Other Articles Of
Interest