The market is not valuing the potential of MGM Resorts International (MGM) iGaming offering as it is overshadowed by their land based operations being crushed by COVID. Given MGM’s advantaged iGaming offering along with the legalization of online gambling, MGM could be worth multiples of what it is trading at today.

MGM has struggled this year as COVID has demolished their land based casino businesses. Looking at the Las Vegas occupancy graph below shows how badly their business has gotten hit. The good news is that occupancy is trending up, currently around 45%, and MGM is extremely solvent as a result of several sale leaseback deals they completed in 2019. They are currently losing around 600mm dollars per quarter at around a 45% occupancy rate. They have enough cash to last about two years under the current business environment.

MGM would be aptly valued if examining it solely on its traditional business. However, COVID has also accelerated the shift towards online gambling. States are looking for ways to make up revenue deficits(projected to be around 615B!) and online gambling has proven to be one of the ways of doing so. iGaming is set to be legal in about 20 states by the end of the 2020 with many more states planning on making it legal by 2021.

Note- for more details on the state of iGaming in the United States, Roundhill Investments has written an insightful piece on this subject.

ROAR is the joint venture between MGM and GVC to lead the US iGaming industry. GVC is a global market leading sports betting and gaming group. Although initially falling short of expectations (they expected to have 10-15% iGaming market share by March 2020), they have made up for lost ground and currently have 17% market share across all the states they are in. The below slide depicts how GVC and MGM complement each other, MGM through its land based operations and GVC through its digital offerings. 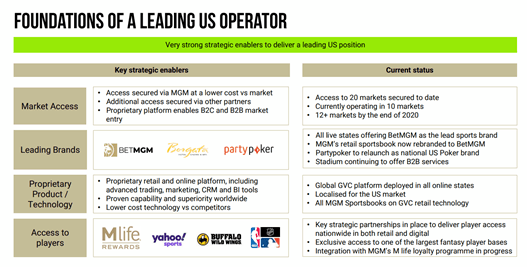 Looking at the competitive landscape, there are two types of players operating on a national scale, land based brands and digital brands. The land based players are MGM, Caesars, and Penn National and the digital players are DraftKings and FanDuel. The digital brands have to partner with land based casinos as one of their “skins” to be able to operate in each state.

We believe what will eventually happen over time is each party (land based and digital players) will try to commoditize the other. This will be to command greater revenue share from the end customer. Whoever has the strongest share of mind will win as it makes the other party less relevant. One can already see this with Penn National Gaming developing their own in-house digital solution (Barstool Sportsbook) while partnering up with DraftKings. This puts them at odds with one another as their gaming solutions will be competing against each other. As digital offerings become commoditized, brands will be the dominant advantage.

Along with it’s casinos in Las Vegas, MGM has casinos in states that about 20% of the US population lives in. In the majority of these states, MGM’s casinos have market leading positions in the land based segment. This is important as the loyalty program is tied to their online segment. The better land based presence MGM has, the more members it gets onto its loyalty program and the more members it can transition to their iGaming and sports betting platform. For example MGM’s Detroit, is the largest casino in Michigan along with commanding a market leading 31% market share by gross gaming revenue. MGM has also partnered with Boyd Gaming to gain access to several other key states (eg Pennsylvania) to engage a wider customer base for their loyalty program. In total MGM has access to 21 states that have made iGaming legal or are in the process of making it legal.

MGM not only has a sterling brand, but also its brand it inherently tied to sports. It owns several arenas (T Mobile, MGM , HyperX Esports) that host events from boxing to e-sports. These venues will be a constant source of alpha that will bring in more customers every year. Competitors such as DraftKings or Penn National will be hard pressed to compete.

Unless a digital operator already has a strong brand (DraftKings and Fanduel) it is hard to differentiate. Fanduel and DraftKings have a brand due to their Daily Fantasy Sports (DFS) business which started back in 2012. They are extremely popular with their apps having been downloaded hundreds of thousands of times. They are now using that customer base and trying to migrate them to sportsbook betting and iGaming (akin to MGM’s loyalty program). Sports betting seems a natural transition for this customer base however iGaming could be a different story. Time will tell if they are successful with doing this.

We examined New Jersey as it is the most developed state in terms of online gambling and could be a telling indicator for what the future of the industry will look like in other states. New Jersey’s iGaming revenue market share for the year is reported below broken down by operator.

MGM has increased their market share to about 25% of iGaming from about 18% share in December 2019. This sample is important as it shows that MGM+GVC have a competitive digital offering against other land based and digital operators and could command the lion’s share of the national iGaming market.

If the legalization of iGaming in other states takes longer than expected, iGaming revenue will stall.

COVID lasts longer than expected would cause customers to habit their local casinos instead of Las Vegas, making MGMs offering less relevant.

If online gambling becomes legalized in New York and other high density states, especially where MGM has a dominant land based operation, this would shed light on MGM’s hidden asset.

We came across MGM as we were researching ANGI and noticed that IAC, a majority shareholder of ANGI, had recently taken a $1B sized investment in MGM. This warranted a deeper dive into MGM as IAC heavily invests in the digital space and they believe that MGM is extremely undervalued given their digital optionality.

MGM at first glance seems to be heavily indebted and losing about 800mm dollars/quarter with Las Vegas tourism taking a massive tourism hit. However, upon closer examination, the majority of their debt belongs to subsidiaries in which they have an equity ownership and they have consolidated the subsidiaries debt onto their balance sheet. Excluding this (and their cash), along with their various equity investments paints an interesting story. IAC laid out the math below: 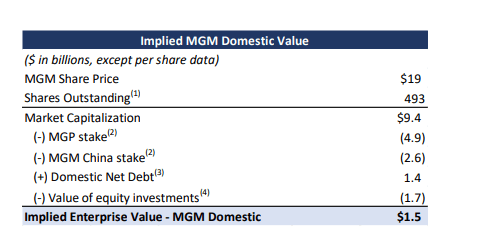 Essentially, the market is ascribing the non-real estate portion of MGM to be worth about 2.5B (reflecting change in MGM share price). This would primarily involve their online gaming segment. For 2020, their online gaming segment (operational in about 7 states) revenue will be around 150mm dollars. For a business that has a dominant brand, high growth (possible three digits), high margin, and a large TAM (50B), 25x earnings seems cheap. How cheap is dependent on the industry growth. If MGM can retain its current market share as online gambling continues becoming legalized, MGM would bring in roughly 4BN dollars per year from this alone. The majority of this would be high margin which would command a high multiple, putting the valuation of MGM conservatively around 50B dollars- about 5x higher than its current price.

Investing in MGM is a play on the brand and its ability to transfer that potential to their digital offering. Given their partnership with GVC, and market leading iGaming offerings, we believe that MGM could be one of the leading players in the iGaming industry.

Disclosure: I am/we are long MGM. I wrote this article myself, and it expresses my own opinions. I am not receiving compensation for it. I have no business relationship with any company whose stock is mentioned in this article.